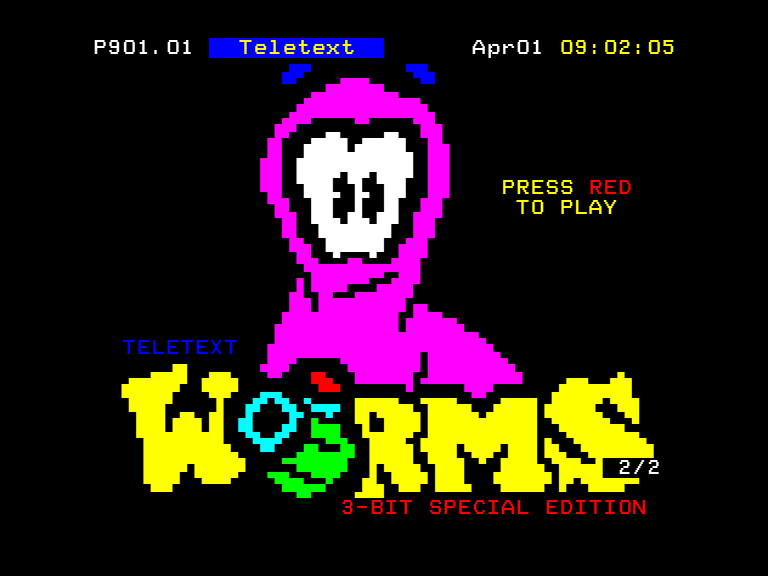 Do you remember the heady days of Teletext? Pressing coloured buttons on your TV remote and typing in numbers to view a variety of different pages from news and weather to jokes and interactive games.

Anyone who grew up in the UK in the eighties and nineties almost definitely will. and if you were into video games (much like me) then you were no doubt an avid reader of the excellent Digitiser. In fact such was the nostalgia for Mr. Biffo and his band of oddballs, which included characters such as Fat Sow and The Man’s Daddy, that Digitiser actually made a comeback in more recent times after a very successful crowd funding campaign. This then led to an absolutely hilarious You Tube series featuring the likes of Ashens, Guru Larry and Octavius Kitten.

But the question is not really whether you remember Teletext, or indeed Digitiser, but if you remember the short lived version of Team 17’s classic strategy game Worms that was available via the service for a short time in 1996?

If you do indeed remember it and were lucky enough to have played it then you will no doubt recall that it was riddled with problems that ultimately meant the game was removed from Teletext servers shortly afterwards. After being launched on 4th January 1996, it was only playable for just under 3 months. Amongst the many technical problems reported by users were page time outs, unresponsive controls and slow game speeds.

This was very unfortunate as Teletext Worms was met with much fanfare at the time and Team 17’s PR Manager April Loofs was quoted in C&VG magazine as saying “In line with bringing our popular Amiga title to home consoles we have also expanded the audience even further so anyone with a capable TV can play it. This is part of our strategy to make Team 17 and Worms household names.”

For many years it was thought that the game was lost in the sands of time but just this week it emerged that lead programmer Kefa Mage had found all the source code on some old disks stored in his loft. He has promised to try and get the game up and running again via the magic of the internet so we can all experience this incredibly interesting piece of history. In the mean time you can revel over these screenshots and try to imagine a day when 4-bit graphics excited people!