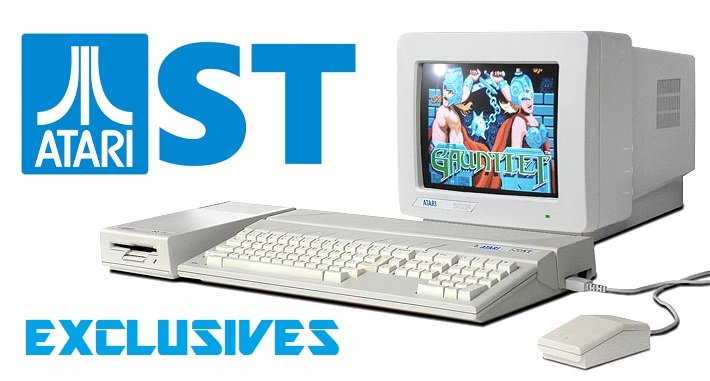 Making its debut in June 1985 the Atari ST would become the machine to lead the 16-bit revolution, being released just over a month before its big rival the Amiga. However the price difference between the machines as well as the configurations (the ST-like Amiga 500 didn’t arrive until 1987) meant that Atari’s 16-bit offering would soar into an early lead.

After a number of price drops and games that started to take advantage of the mostly superior hardware, the Amiga did eventually take over its great rival and emerge as the eventual winner in the 16-bit computer war. But the ST didn’t give up without a fight and still managed to best the Amiga in several areas, most notably 3D games thanks to its faster CPU.

Over the years though, many people have come to regard the Atari ST as a poor man’s Amiga and ignore its many advantages. In this list I am going to show you ten of the Atari ST’s very best exclusives. Not just games that didn’t come out for its arch nemesis, but never came out for any other systems full stop!

Released in 1987 by the obscure Kent based company Nexus (who only ever published one other Atari ST game), Skull Diggery is an unashamed clone of the hugely popular 8-bit computer game (and later arcade game) Boulder Dash.

Now, I’m sure you’re aware that Boulder Dash clones aren’t exactly rare on the Atari ST and indeed there was also an official conversion of the game for the 16-bit computer too. So I am sure that you are wondering what sets this one apart? Well, it’s because Skull Diggery used the medium resolution mode as standard and could also be played in a high-res monochrome mode too. There were very few games other than some of Atari’s own releases that use this mode and it meant that if you used your ST for serious applications that required a high-res monitor but also wanted to play games you were a bit stuck.

So Skull Diggery ended up being a bit of a god send for serious Atari ST users and became somewhat of a cult classic for the machine because of that. It also helps that it’s a jolly good rip-off of Boulder Dash too!

One of the main things that signalled the death knell for both the Atari ST and the Amiga was the arrival of first person shooters such as Wolfenstein 3D and Doom for the PC. Both computers did try to fight back somewhat with similar games of their own and Unique Development’s Substation is the Atari ST’s offering.

Firstly I should mention that this game will only work on 1MB STe machines and upwards as it needs all the extra hardware features to make it possible. In fact you could easily argue that this is one of the most technically impressive games ever released for the Atari ST. The actual game plays very much like the aforementioned Doom with you moving around an enemy base shooting all sorts of different enemies, opening doors and picking up useful items. After each level you can upgrade your character and your weapons to make life easier.

Substation is an incredibly impressive title with a smooth frame rate, big levels and excellent digitised sound effects. Released in 1995, some 10 years after the computers debut, it showed that the Atari ST could definitely still hold its own right up until the end of its commercial life.